If you are planning on programming the robot using your laptop, this is the manual of all commands. If you have a copy of an AS Language program, you can use this to explain it.

This is the way we access the robot programming interface. This program is IP based and similar to HyperTerm

This manual explains how the Teach Pendant works

Kawasaki Robotics Spin Control Function has two control systems. Their differences are listed in the table below.
1. Simple Spin Control: Expands the motion range of JT6 or the external rotation axis set as the spin axis, and synchronizes movement of the spin axis with the other axes (JT1 – JT5) towards the set point. In short, expands the normal motion range for a robot’s JT6 or external rotation axis.

2. Standard Spin Control: Functions the same as Simple Spin Control but without synchronizing movement of the spin axis with the other axes (JT1 – JT5). Uses special commands/instructions for spin control in operation.

Spin Control is more often used in welding robots but can also be used as a safeguard to keep palletizing robots from tearing up the harness on the 4th axis. 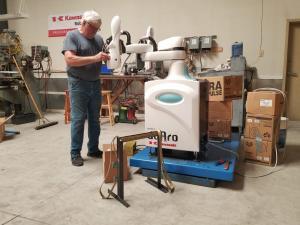